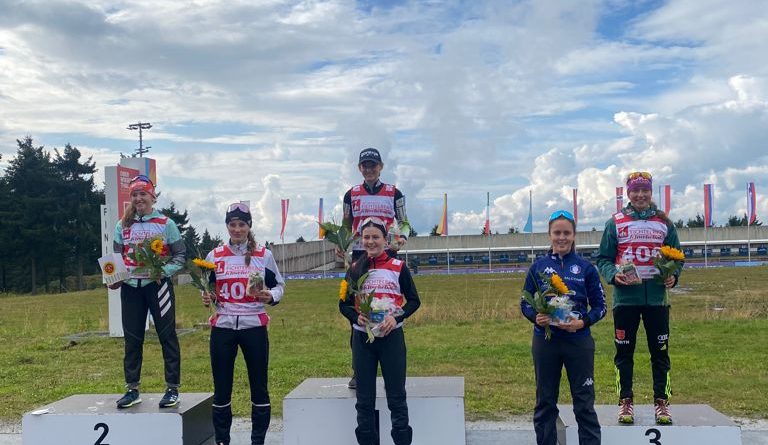 This weekend, the O.P.A. Alpencup takes place. On the two days of the competition, 80 young athletes competed in the disciplines of Nordic combined.

Among them were two athletes from the organizer WSC Erzgebirge Oberwiesenthal e.V., Ronja Loh and Tristan Sommerfeldt. And the results of the two are impressive. On the last of the two days of the competition, the weather also played its part and it stayed dry on the Fichtelbergschanze and in the Sparkassen ski arena. On Saturday, on the other hand, it was more of a wet affair, but this did not prevent some spectators from watching the competitions in the disciplines of ski jumping and cross-country skiing at the two sports facilities and supporting the athletes with their applause.

However, Silva Verbic, who started fourth, won again. Trine Göpfert came second in front of Magdalena Burger and Anne Haeckel. Tereza Koldovska (CZE) and Ronja Loh complete the podium. Trine Göpfert is still in the lead in the overall standings. In second place is Lena Prinoth and Silva Verbic on three, just ten points ahead of Ronja Loh on four. In the men’s race, Iacopo Bartolas jumped to first place in the CC competition and won this race as well. Tristan Sommerfeldt, who only started the race from seventh position, caught up over the ten kilometers and can take home the silver medal. Jan Andersen (GER) crossed the finish line in third, ahead of the Frenchman Marco Heinis and the two Germans Severin Reiter and Simon Mach. Iacopo Bartolas is currently also leading the overall ranking of the O.P.A. Alpine Cups. Tristan Sommerfeldt is in second place, 60 points behind.